We were delighted to hear that we'd reached the finals of the Hertfordshire Chamber of Commerce Inspiring Herts awards for 2014!

Having entered two categories - Excellence in People Development and Small to Medium Business of the Year it was great news to hear that we are finalists in both.

Here's what Herts Chamber had to say:  The Inspiring Hertfordshire 2014 Awards, launched to celebrate success and achievement and boost business confidence in Hertfordshire, has yet again had a fantastic response with a record number of entries

Chamber Chairman, Neville Reyner CBE DL, said: ‘We have been overwhelmed by the response to these awards. The quality of the entries was most impressive and presented an almost impossible challenge for the judges. My thanks to all that entered, our hard pressed judges and our sponsors without whose support these awards would not be possible. I would like to extend my heartiest congratulations to all who entered and, in particular, to those who were shortlisted.’ 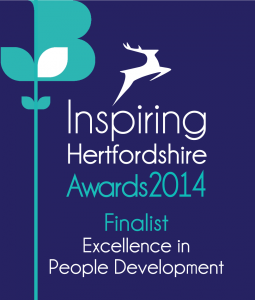